Here's a 3-minute intro to bitcoin:

Allow me to steer you down the bitcoin rabbit hole...

- can send payments to anyone around the world in minutes for pennies, as well as transport large amounts of money digitally

- new businesses are adopting bitcoin as a payment option every day; lower processing fees and no chargebacks are very attractive to merchants

- despite its market volatility, long term projections and graphs of bitcoin show it to be an unparalleled store of value at a time when the US dollar is losing its purchasing power (and respect) to inflation and currency manipulation

-  because there is only going to be a finite amount of bitcoin ever made (and produced at a steady rate), logic dictates they will become more valuable as time goes on as demand increases and supply, while steady, has an ending point

How did I get involved in bitcoin? I first heard about it on an episode of "The Good Wife" last year and kinda forgot about it. Then I stumbled across this video, which I wrote up for Upworthy, after bitcoin surged in price from $32 to $60 in March. And now, as a representative of Infiniti Poker, a US-facing online poker site that accepts deposits and processes withdrawals from US players only in bitcoin, it's legitimized my obsession in job form.

I share this with you because I want us all to WIN. I profit nothing from you getting into bitcoin (well, not unless you go play on Infiniti Poker). Rarely do you get a chance to get in early on something that clearly has world-changing properties. Bitcoin is to money like email is to the post office; the future vs. the fading present. For every bump in attention and traction (there are now bitcoin ATMs, bitcoin businesses in every industry you can imagine, and innovations coming through every day), the price goes up due to media attention, so I want forward thinking individuals I know, like yourself, to get in there while the getting's good. 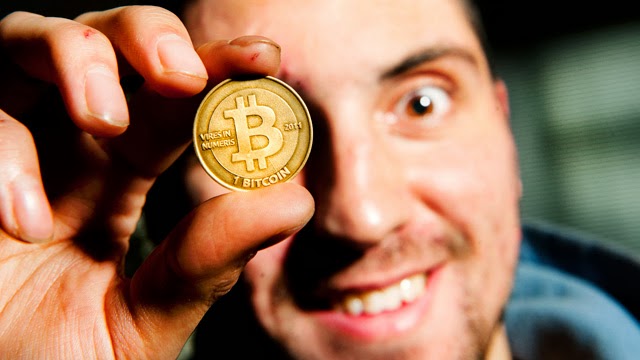 How do you get started? There are some options here or you can go to Bitcoin.org for more information on setting up a bitcoin wallet.

If you have fully drank the Kool-Aid, there are some additional resources for you below. As always, I am here for any questions you may have or celebrating our good fortune you want to do. Congratulations on surviving this Bitcoin Primer and enjoy your ride with BTC!

Keep an eye on the exchanges! http://bitcoinwatch.com/

What a bitcoin is worth in fiat currency! http://preev.com/

If you want to explain bitcoin's importance to someone else: https://www.upworthy.com/one-man-destroys-the-need-for-paper-money-in-a-single-interview
Posted by Blacks In Bitcoin at 10:30 PM