Two disruptive events happened yesterday that got the crypto world talking. Unfortunately, not all publicity is good publicity, as the effects of Elon Musk and Vitalik Buterin's actions may have unintended consequences for the future of crypto. Additionally, it seems like the SafeMoon profit rocket has now stalled into a permanently low orbit of its own making.

THE $50 MILLION TO BILLION DOLLAR RUGPULL 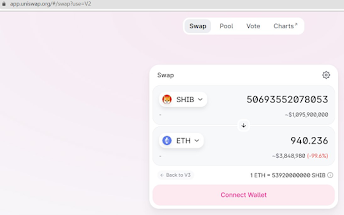 A lot has been made over Vitalik Buterin's "gift" of a billion dollars worth of SHIBA INU. Instead, the real story is a wildly underreported rugpull by the godfather of ETH that makes all of crypto look bad.

Yes, it was stupid of the SHIBA INU devs to gift him half the token supply and *hope* against hope that he didn't pull the LP tokens (claim checks for the liquidity provided in a pool) like he did at Uniswap but that's exactly what he did. To the tune of $56M. 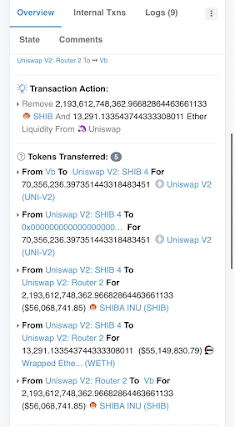 1) Not his money, he rug pulled by pulling liquidity on Uniswap
2) Nobody cares where it goes, he's billionaire and able to donate money on his own, not using other's money including from poor people
3) He's gonna be tax free thanks to this, might even launder money

VB just sent a billion dollars' "worth" of useless tokens to that India COVID relief foundation. THIS is what it looks like when your token is illiquid (lacks liquidity or actual CASH to back up their tokens). Do you REALLY have a billion dollars of anything if you can't exchange it for stuff?

He pulled the liquidity first, so the charity can't sell the tokens. He gets a billion-dollar tax credit and the charity gets stuck with a bunch of illiquid assets they can't sell. Not that I care either way, tbh.

And this is why it matters:

I don't hold any but I feel how they are feeling right now. This is a rug pull. Some lost everything without notice and I feel sorry for them. This is the very thing we're fighting for and if the founder of ETH can't set an example then we're here for nothing. Scammers will rise.

What that does is send a signal around the rest of the decentralized exchanges (DEXs) that the cupboard's bare, start selling your Shiba Inu tokens because there's not going to be enough money to back up whatever their nominal value is at the time. This is why you saw the price crash 25%-30% in a day.

What galls me the most is that myopically greedy people are being TOLD VB rugged his own donation and they STILL either revere him, don't care, or both - just because they hit a lick early and need the grift to continue.

Yes, that was technically Vitalik's money to do what he pleased with. However, as a billionaire founder of the half-trillion-dollar market cap Ethereum cryptocurrency, taking that $50M of liquidity out while repackaging the move as a "gift" won't be worth the amount of ill will generated from a marginal sum that was added to his vast crypto wealth.

These are the kinds of things that invite closer scrutiny into the space by currently befuddled US regulators. Don't be surprised if huge displays of ethics-free greed faster ushers in Crypto Winter, regulation - or both. 🙃 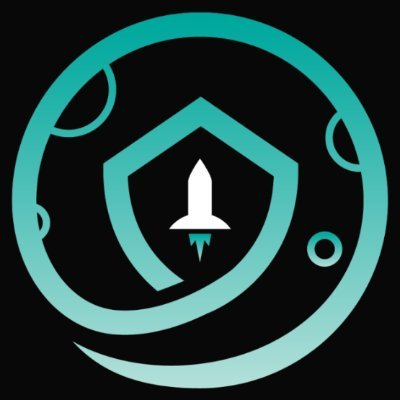 Basically, there's liquidity provided with each SafeMoon transaction (i.e. 2.5% of BNB and SafeMoon each goes into a liquidity pool on PancakeSwap, meaning there will always be LIQUIDITY to trade in and out of SafeMoon with BNB as you need to) and a ginormous token supply that, technically, is getting smaller as well with each transaction (a percentage is "burned" each time, meaning a portion goes to a dead account and is removed from circulation). But the issue is that anyone who's getting into SafeMoon now (really in the last couple of weeks) is buying into the bottom of the pyramid (scheme).

Like CETO, you'll need to profit minimum 20% just to cover your entrance-exit fees, right? But in SafeMoon's case, there's no early withdrawal penalty period to collect divs - it can be pumped and dumped (and IS, mostly by the developers to the tune of tens of millions a week) at will. So if you're buying in now and the liquidity pool is growing faster than the rate of either people buying it up to HODL or new users to join into the ponzi (SafeMoon has no products or utility yet save a weak-ass wallet lol; even CETO is launching a lottery game this week called Big Tent and a more sophisticated, interconnected DeFi token called CEFA), then you'll have an oversaturated liquidity pool that will suppress the price - too much supply.

New Math: Too much/neverending liquidity (the more popular it is, the more liquidity it provides!) = price suppression = loss of faith by newer users = downward price action over time as latecomers get rekt.

"The earliest devs and adopters will be able to exit at a profit, but even if nobody sells, once the pool gets big enough new entrants will not be able to exit with profit. It was an ingenious implementation for the devs, however it sacrificed the longevity of the protocol to ensure their safety."

What's interesting in the post is they mention that a lot of these liquidity + burn tokens will fall into the same trap. I think some may be able to escape it if 1) their token supply isn't ridiculous, i.e. < 1T and 2) if it incentivizes you to HODL more than flip it.

That's why I participated in the (failed) CEFA pre-sale because I'm a HODLer. Unlike CETO, you'll be able to move CEFA without an early withdrawal penalty. But if CEFA's locked away enough for a monthly airdrop for 20 years, to do massive yield farming, 90 day bond offerings, etc. - all with a 100M token supply where 20M's already burnt - demand should outstrip supply the longer it goes on, even with the continuous liquidity.

I mean, I knew the quadrillion token supply thing was a turn-off for me from the outset with SafeMoon: it just sounded insanely large to ever have enough of an impact to really move the price for later-stage investors. Kinda rubbed me the wrong way, which is why it took me a month after hearing about it before securing a small bag. Now at least I know why... 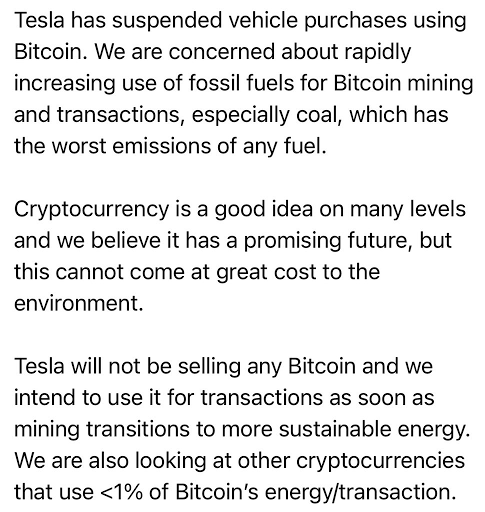 If there's ever an investigation to price manipulation into Elon Musk, this statement should be Exhibit A in the SEC's case against him. Acting like he just discovered bitcoin takes energy.

He isn’t selling because of this inaccurate energy narrative.

In the video tweet from his hit on CNBC, digital assets fund manager Anthony Pompliano ("Pomp") goes on to explain that 75% of bitcoin mining comes from renewable energy and that the amount of coal-fired electricity consumed by the legacy, brick-and-mortar global banking system dwarfs that of which bitcoin does. Either way, that Elon Musk, noted Smart Guy, just woke up to the energy costs bitcoin - feeding into a familiar yet totally overblown narrative - is disingenuous at best, price manipulative at worst.
And like the lemmings his fanbois are, BTC was down 3% in an hour... 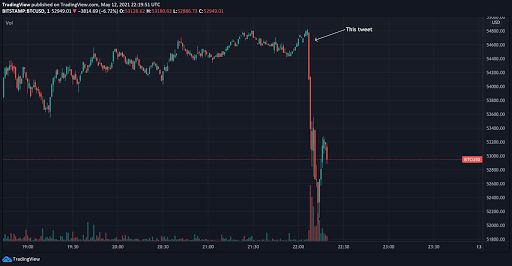 I believe it's both price manipulation of BTC AND of DOGE - bless his heart. The DOGE community, for whatever reason, hangs on his every word. So with his already taking DOGE for SpaceX space tourism, he's clearly setting it up to be the de facto crypto for Tesla sales. At this point, DOGE is practically an Elon Musk fan token at this.

What do you get the billionaire who has everything? Cheap BTC and power over his own memecoin.

I DO think DOGE will survive Crypto Winter - as they have previous ones. I think it may be half its price now but it'll survive. Somehow the DOGE early adopters just need to get by on 2000x or whatever.

SO WHAT HAVE WE LEARNED?

Not too unlike the extreme cognitive dissonance playing out in Republican politics right now, if it's even minutely profitable in the short term, people will willingly buy into a lie, consequences be damned.

As corny as it sounds now, when I got into the bitcoin community in March 2013, the cliche' "I'm in it for the technology..." was true. We knew someday it would be something. But at that time, it was largely the intentions of idealistic messageboard grinders keeping the flame of hope and utility alive for a $50 bitcoin, that its borderless, permission-less, low-fee intrinsic value would eventually become the Internet's currency of choice.

While the explosion of DeFi and DEXs have made it easier than ever to scam and defraud people, I resist the "get rich at all costs" mentality that's enthralled the community because of these crypto roots. I believe use case, longevity, and ethics still matter. No, you can't always have all three all the time with every project, but you gotta have at least something to hold onto. I have seen good projects go bad and bad projects go good but the ones that tend to have all three are the ones that have survived the beariest of bear markets.

If you wanna chase the dragon and try to time your entrance/exits in dogshitmooncoins, then if you like it I love it. Hopefully any potential downside damage is limited to yourself.

However, I will point to this overly long post as a public reference point as to why I do not endorse that strategy or mentality - even if it makes me a crypto fossil. When Crypto Winter and regulation come - and they will come - it's days like yesterday featuring stunts like these, that we will look back at with dismay, if not regret.

Posted by Blacks In Bitcoin at 9:11 AM